Log in Register
What's new
You are using an out of date browser. It may not display this or other websites correctly.
You should upgrade or use an alternative browser.

What’s the next move for a growing company that is doing a lot of things right? Making sure that their online presence is secured with the best brandable domain in its market.

Moderately successful businesses that want to break free of the limits of brick and mortar shops and become substantial players in the world of online retailers have to create brands and market them. The Newark Nut Company began in 1929 as a brick and mortar store and was bringing in $1.25 million in 2002 with sales split between wholesale and retail. Around this time, the company began to think more about its online presence and launched the nutsonline.com website. This would prove to be an excellent growth move as sales began to shift from to retail store to mainly online. The Newark Nut Company eventually closed the retail store and earned $5 million in revenue in 2006. This number continued to increase, reaching almost $20 million in 2011.

Sounds great right? It was, but the company still had a problem with customers remembering the domain name nutsonline.com. The issue was further highlighted after the Newark Nut Company supplied Jordan almonds to the nationally broadcast ‘Rachael Ray Show’ and at the end of the show the host mistakenly thanked “nuts.com.” Nuts.com was already owned and not for sale, but the company tried to buy the domain name anyway because customers frequently thought this was the website. After a rejected initial offer of $200,000, the Newark Nut Company finally met the domain owner’s price of $700,000 and would have been happy if the money was recouped in 10 years, according to one of the principal owners, Jeff Braverman.

Luckily, the Newark Nut Company did not have to wait 10 years to recoup its investment on the nuts.com domain name. After some challenges with the redirected links and traffic issues, it reportedly paid for itself in about 6 months. It turned out that the new domain name and brand change were the right investments to make, given the continual monthly increase in direct traffic from people finding the company by simply typing the domain into their browser’s address bar. The first year of the change to the new domain saw revenue from that direct traffic grow by more than 65%, which was significant for a company that had historically been a seasonal business. The company later changed its name to match the domain and earned more than $35 million last year.

Businesses with awkward or hard to remember domain names can be held back from reaching greater revenue potential through online sales over the Internet. The original Newark Nut Company was not performing badly in its marketplace, but by building an online website and fixing its domain name, the company grew more in a couple of years than it did in its first 70 years of existence as a retail store. Long-term, the four-letter domain is easy to remember and even easier to optimize for search engines. Customers need clarity and businesses are better off in the long run acquiring an unmistakable domain for a better brand as soon as it is feasibly possible.

Businesses that change awkward domain names to more brandable ones also benefit from a defensive standpoint. The investment saves money and keeps control of the domain out of the hands of competitors who could use it to siphon away sales. It also keeps the domain out of the hands of customers who might have complaints (real or imaginary) and want to publish misleading information under the associated name. Businesses usually get better investment returns by ensuring existing and new customers can find their company online and brandable domain name assets are a good way to facilitate this. Still unsure? Brokers can be good resources to consult if your business needs a little history of brands changing their names online and valuation.

While stories like this are nice to read for domainers, I'm sure it's not going to work nearly as well for most domains. Recouping money in 10 years is generally not considered a good enough investment to make it viable...unless you feel the value of the domain is also a growing asset... which is gamble IMO.

ttfan said:
While stories like this are nice to read for domainers, I'm sure it's not going to work nearly as well for most domains. Recouping money in 10 years is generally not considered a good enough investment to make it viable...unless you feel the value of the domain is also a growing asset... which is gamble IMO.
Click to expand...

If the original owner registered the name for say $132 USD and sold it years later for $700,000 there would be few returns in the world as good as this on record.... only in the world of domain names possibly or a lottery ticket.

The point is also the buyer of Nuts.com recouped their investment back in 6 months, they greatly increased not only their sales and profits but also increased the value of the company if they choose to sell it later.

Obviously the Premium Generic Domain name purchase and use of Nuts.com as an investment has paid off.
http://www.forbes.com/sites/ianmoun...-into-a-thriving-web-retailer-2/#464c4d1f1f9f
http://www.bloomberg.com/news/artic...com-the-web-fuels-a-family-shops-crazy-growth

"Sol Braverman founded Newark Nut in 1929. Seventy years later his grandson Jeff, then a freshman at the University of Pennsylvania, hired a friend to build a website for the family nut shop at nutsonline.com. When the site went live, the business was overwhelmed with orders. “My dad told me, ‘Turn that damn thing off,’ ” Braverman says. Jeff, 33, worked briefly at Blackstone postgraduation, then joined the nut company in 2003. Two years later, the city of Newark bulldozed the shop to make room for a hockey arena, and the Bravermans moved the business online. A new challenge emerged—standing out in a market that has attracted local health food stores, specialty chains, and megaretailers:

“The real competitor for every online business is Amazon. People want free shipping on $20 orders. That’s really tough for us. You can negotiate on the cost side with UPS and FedEx, or maybe you can look at raising your prices to build shipping in. In the end, we decided that we really needed to focus on building brand awareness.” 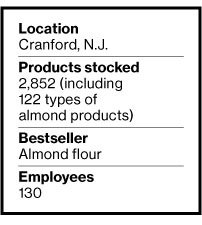 “I’d run into old friends, and they’d say, ‘What’s the name of your website again?’ The turning point was when we provided Jordan almonds to the Rachael Ray Show and at the end of the show she said, ‘I’d like to give a special thanks to Nuts.com.’ At the time, the URL was owned by this guy in Guam who had bought up a lot of URLs and was just sitting on them.”

“I offered $200,000 for the URL, and he turned me down flat. I finally said to him, ‘What number gets this done?’ It was a pretty healthy number. I thought, if I make my money back in 10 years, great, because I believe in this.” 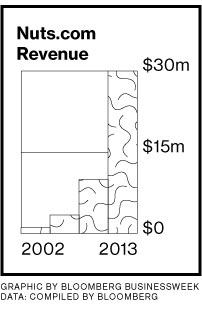 “We launched the new site in January 2012. As we were getting ready for the name change, we had a meeting with a design firm, Pentagram. This is a big-deal firm. We’re a fun and quirky family business. I told them, ‘We have these cartoon characters.’ They said, ‘We get it.’ They ended up redrawing the characters, and they found a type person to build our Nutcase font. First we put it on our boxes. Now we’re redoing our entire website.”
“I’ve always shied away from wholesale distribution, because I figure anyone can do it. Now I’m thinking, ‘Maybe I need to change my mind-set and sacrifice some margin.’”

“Now that we have our packaging right, I can see going into a big-box store or a convenience store. Maybe there are pop-up stores or airport shops we can get into. I’m thinking, ‘Is there a way for us to really blitz this?’ I think there is.”

Hopefully they'll buy Nuts.com.au when they're ready to expand to Australia...

Send them an email or phone them up.. or think about what more you can do with it! http://www.abc.net.au/news/2015-09-16/aussie-nuts-make-1-billion-in-exports/6780928
The world goes nuts for Australian nuts
ABC Rural
Cassie Hough

Australian tree nuts are riding high on the back of increasing demand, generating $1.2 billion at the farm gate, and more than $1 billion in export earnings this year.


These figures cement the tree nut industry as one of Australia's largest horticultural industries and the country's most lucrative horticultural export.

"It's a milestone that we were hoping to reach sometime around 2020 so it's extremely pleasing to see it reached in 2015," he said.

"It's a combination of a lot of hard work by Australian tree nut growers, to get their orchards in, and to manage them in a way that is delivering some of the world's best productivity levels."

Mr Burnett believed the promotion of nuts as a healthy food had also driven very strong demand across domestic and export markets.

"I think with an increasingly health-conscious consumer around the world that's been a very big part of the strong growth in demand," he said.

"Nuts are also an extremely versatile product, I think we're one of the few products that are available in seven aisles of the supermarket."

Almonds make up the bulk of the nut production and a further 5,000 hectares of new plantings are expected to be put in over the next three years.

They are supported by walnuts, pistachios, hazelnuts, and chestnuts which are all expanding the planting area.

The macadamia industry is expected to see 1,500 hectares of new plantings and the pecan industry is about to embark on the most significant plantings since the 1970s.

Their site says they ship here already. Big banner, maybe that's as far as they plan to go.

johno69 said:
Their site says they ship here already. Big banner, maybe that's as far as they plan to go.
Click to expand...

Yeah I don't ever expect them to come knocking for my little business. Their shipping cost is a killer when ordering from down here, and I'd be interested to know if they actually sell much.

Shane said:
Yeah I don't ever expect them to come knocking for my little business. Their shipping cost is a killer when ordering from down here, and I'd be interested to know if they actually sell much.
Click to expand...

Give them a call maybe .. Chairman of the Australian Nut Industry Council, Jolyon Burnett, http://www.australian-macadamias.org/industry/item/495-jolyon-burnett